*European used software dealer usedSoft steps up its involvement in competitive darts. As of today, the company will be sponsoring Germany’s most famous darts pro Max Hopp.

“Having competed in the world cup eight times, Max is Germany’s most successful darts pro and the perfect addition to our usedSoft team”, explains Peter Schneider, founder and managing director of usedSoft. “He is not only a top player, but, as a TV expert, also a first-class ambassador for his sport. His authentic demeanour and enthusiasm make him a valuable addition to our usedSoft team.” Since 2020, usedSoft has already sponsored Fallon Sherrock, one of the best darts players in the world, three-time world champion and long-standing world number one Michael van Gerwen. In spring 2021, fellow Dutch countryman Vincent van der Voort joined the usedSofts darts trio, which has now become a quartett. 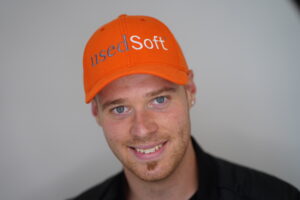 Hopp qualified for the world cup for the first time at the young age of 16 years and won, among other things, the youth world championships, the German Darts Open and Players Championships of the most well known dart association’s PDC. In the media, he is known by his nick name, the “Maximiser”. For some years, he has also appeared as a TV expert for various dart events. He is currently taking part in the “World Matchplay” major tournament for the TV station SPORT1.